Althea Matthews, a Bronx-based affordable housing activist, has been homeless since losing her apartment in a fire in December 2019. She currently lives in a single room in a homeless shelter and is grateful that it’s safe and mostly clean — especially compared to congregate shelters. Still, she wishes that she didn’t have to share a bathroom with other residents, and she has avoided using the kitchen since repeatedly seeing mice on the stove.

“If you can have your own shower, your own cooking area, it could do a lot for me,” she told New York Focus, adding that it would do even more for people living in dormitory-style shelters.

Last year, she and other advocates fought for New York State to fund a program to convert vacant hotels and commercial properties—many teetering on the edge of financial ruin due to reduced demand during the pandemic—into single-room affordable housing units.

They won: in June 2021, the legislature passed the Housing Our Neighbors With Dignity Act, or HONDA, which allotted $100 million for such conversions in New York City and required that the resulting housing be reserved for homeless and low-income New Yorkers. The Community Service Society, an anti-poverty nonprofit, called it “a major step forward towards a just recovery.”

But nearly a year later, none of the HONDA money has been used, and no conversions have even begun.

The New York State Division of Homes and Community Renewal (HCR), the agency in charge of administering the program, told New York Focus that it has received no applications and only two preliminary proposals. (In February, Politico reported that the program had drawn one applicant, but this was a preliminary proposal rather than a complete application, according to HCR.)

This year’s state budget included another $100 million in funding for HONDA conversions and expanded the program statewide, but both developers and advocates say that money is not the main obstacle to hotel conversions. The problem is New York City’s relatively onerous zoning and housing code regulations, which make it difficult and expensive for affordable housing developers to legally convert hotels to affordable housing.

“The extra money won’t do any good without the regulatory changes,” said Mark Ginsberg, a partner at Curtis + Ginsberg Architects, a firm that has designed numerous affordable housing developments in New York City. “It doesn’t pencil out unless you change the code.”

But time may be running out. Hotel occupancy rates have begun to rebound as tourists return to the city, making the prospect of affordable housing conversions less attractive to hotel owners.

“The window is rapidly closing as New York gets back to normal,” said Ted Houghton, president of the affordable housing advocacy group Gateway Housing. “We need to act quickly.” 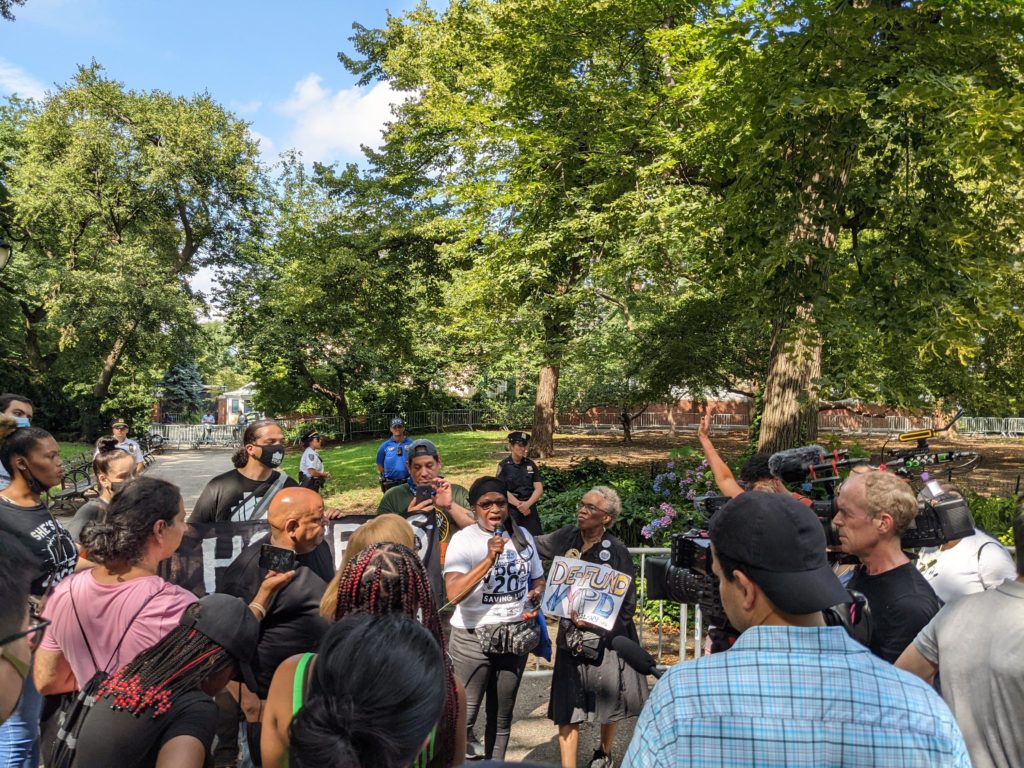 Under New York City’s zoning regulations, permanent residential housing may only be built in residential zones. That means hotels currently located outside commercial zones cannot legally be converted to housing. Rezoning hotels for housing requires a process that can take months or even years of near-herculean lobbying and constituency building, during which opposition from neighborhood residents, community boards, local electeds, or the mayor can derail the entire project.

Hotels located inside residential zones can legally be converted into permanent housing, but only after undergoing extensive renovations to bring them up to code. Hotels and residential housing are subject to different sections of the building code, so when a hotel room is changed to a residence, it must be retrofitted to match residential codes. This process can require costly measures such as widening elevator shafts and door frames and reconfiguring walls to increase units’ floor space.

These expenses can make retrofits cost-prohibitive for the affordable housing developments envisioned by HONDA–perhaps accounting for the low number of proposals that the state has received.

“Hotels aren’t cheap,” to purchase, Ginsberg said. “But if you are going to just update some finishes to make them more durable, and make it supportive housing, it’s a lot cheaper than having to gut and rebuild the whole thing.”

The bill would make any hotel within 400 feet of a residential zone eligible for conversion to permanent residences and allow developers to bypass the code requirements that usually apply to residences, as long as the development is in compliance with the hotel building code. These changes would open up several hotels that developers have been eyeing since HONDA became law, some of which are just a few yards outside residential-zoned areas.

“We have a tremendous housing crisis, and we ought to be moving as rapidly as possible to generate new housing opportunities,” Kavanagh told New York Focus. “It’s valuable to have a quicker and more flexible approach.”

The HONDA funds don’t expire, but the chance for cost-effective conversions may be slipping away as tourism and commerce return to New York City and hotel owners feel less incentive to sell their properties. In recent months, hotel occupancy in New York City has rebounded to over 85 percent of pre-pandemic levels.

“With a gradual increase in occupancy the incentives to participate in adaptive use to affordable housing diminishes for owners,” Vijay Dandapani, president and CEO of the Hotel Association of New York City said in a statement to New York Focus.

Over 100 hotels remain closed citywide, and Mayor Eric Adams’ administration doesn’t expect tourism to fully recover until 2024 — meaning that there may still be a chance for HONDA.

Hotels in Manhattan may be out of reach given the limited funds available, but Charles King, president and CEO of Housing Works, said that hotels in other boroughs likely have a longer time window.

“Smaller hotels outside of the tourist hub are going to have a much harder time coming back, so I think they are more likely to continue to be on the market,” he said.

Will the state legislature pass the bill this year?

Cymbrowitz told New York Focus that he’s “optimistic” about the bill’s chances in the Assembly and that it has broad support, but noted that he hasn’t yet discussed it with Assembly leadership.

On the Senate side, Kavanagh said that he’s “confident” that the bill will move forward and that there’s “significant interest” in passing the bill. He declined to say whether Senate leadership supports the bill, and spokespersons for Senate and Assembly leadership did not respond to questions from New York Focus. 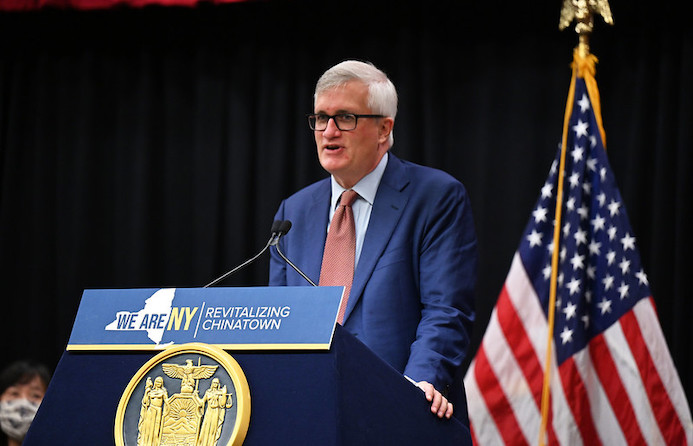 If the bill is to become law this year, it’ll need to be passed before the legislature adjourns for the year on June 2.

On the campaign trail, Adams emphasized his support for hotel conversions, and, according to Kavanagh, representatives of his administration have been advocating for the bill in Albany.

“The city was lobbying for us to do this in the budget,” Kavanagh said. “I think it’s still a big priority for the administration to get this done before we adjourn.” A spokesperson for Adams confirmed that the mayor supports the bill.

And in her first public comments on the issue, City Council Speaker Adrienne Adams told New York Focus that she also supports Kavanagh and Cymbrowitz’s bill.

“We have to create more flexibility in our zoning and building codes to allow for the conversion of vacant hotels into desperately-needed supportive and affordable housing,” she said. “I’m eager to work with my colleagues in the State Senate and Assembly to seize the moment and develop new strategies for building the permanent housing so many New Yorkers desperately need.”

In 2020, a year before New York passed its first round of HONDA funding, California created a similar program to fund conversions of distressed properties into affordable and supportive housing. Unlike New York’s, California’s program, called Homekey, has been highly effective, producing over 6,000 units of housing in the past two years.

This success was for two reasons, observers said. First, California allotted much more funding to Homekey than New York did to HONDA: an initial $800 million in 2020, rising to more than $2.2 billion in 2022. And second, California exempted developers from zoning requirements in the initial legislation, allowing development even outside of dedicated residential zones.

Deputy Senate Majority Leader Michael Gianaris, the lead Senate sponsor of HONDA, said that former Governor Andrew Cuomo’s opposition to the program was a reason for its reduced ambition relative to California.

“Our previous governor was of a particular type in terms of programs that weren’t his idea, and so I don’t think it was ever a priority for them,” he said. “That resulted in less money being agreed to at budget time.”

In 2021, the Senate’s original budget proposal asked for $250 million for HONDA, more than double the final $100 million agreed to between the legislature and the governor. Even the larger $250 million amount would still have been far less than California’s initial $800 million.

“To the extent we took a more conservative approach, it has been to our detriment,” Gianaris said when asked about California’s Homekey program. “Their program has been very successful, and has created a significant amount of affordable housing that didn’t previously exist.”

Even if the zoning exemptions pass and all the funding is used, $200 million will likely provide fewer than 1,000 units of housing, since retrofit costs run in the hundreds of thousands of dollars.

If the bill isn’t passed, disused hotels may be converted into shelters instead, since shelters and hotels have the same zoning and building codes, so retrofits wouldn’t be necessary.

“The same people will live in them but they will be shelters, and they will be institutional and uncomfortable,” Houghton said. “It would be much better if we could do it as affordable housing.”

Living in a converted hotel room would hardly be the lap of luxury — HONDA units are not required to have stoves or full ovens, for example, though they must have microwave ovens and outlets for hot plates. But for many homeless New Yorkers, a room of one’s own would still be an improvement.

“It would be private,” Matthews said. “People want an apartment, but that’s a beginning.”

The best time to visit Salzburg

How A Travel Credit Card Can Be Valuable This Summer

Charles Barkley waxes poetic on his golf game, gambling, NIL and his love for Lake Tahoe