SALT LAKE CITY—The unfolding conflict in Ukraine is tragic, no doubt. It is also leaving many of us wondering how it will impact our lives. Travel, for one, has been made more complicated and more expensive. Experts say if the hostilities keep up in Eastern Europe, it will lead to higher airfares here and abroad and it will lengthen flight times.

After two years of COVID-19, the airline industry now faces dramatically rising oil prices. They were already inching up but on the day the conflict erupted, prices topped $100 per gallon for the first time in eight years. Crude oil goes into jet fuel, the biggest expense for airlines save labor, said Willis Orlando, a senior product operations specialist for travel deals website, Scott’s Cheap Flights.

“This tit for tat with sanctions with Russia, one of the world’s biggest oil producers, only means that oil prices will remain high,” said Orlando, “Which means that airlines are going to have to make up that cost somewhere.”

That translates to higher ticket prices.

Jet fuel in North America is already 4% higher than last month, according to the International Air Transport Association. And that’s up 57% from this time last year.

“If you’re someone who have gotten used to those $97 coast-to-coast flights throughout the middle of the pandemic, hey, guess what, those are pretty much gone at this point,” Orlando warned. 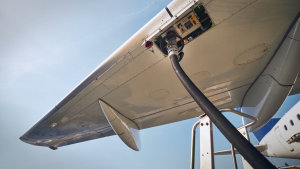 Tickets to Asia and the Middle East will cost more, as jetliners now must burn much more fuel to fly around the war zone. And the violence has made travelers more hesitant about Europe.

“We’ve seen about a 10% drop in international demand for flight searches over the last week,” Orlando explained.

Orlando believes this will push up demand for domestic tickets. Higher demand means higher competition amongst the airlines, and that could open possibilities for discounts.

“But you need to be quick because you’re competing with a lot of other Americans for those very same tickets,” he said.

The conflict is also poised to interrupt the airplane supply chain, as Russian factories export key components used in American and European jetliners. That will mean fewer new planes delivered than promised and in turn, higher fares for us.

Flights to Auckland starting under $700 round-trip

Act fast: Round-trip flights to Italy for as low as $373