In several previous articles, I’ve covered the slow emergence of electric vans. If you’re laser-focused on the environment, electric vans are exciting because they’ll allow many commercial vehicles to go electric. Most work vans today run on gas or diesel, aren’t hybrid, and therefore get disgusting gas mileage in the city (where they mostly operate). This means that not only will their owners benefit from cheaper total costs of ownership, but also that cities will get rid of a lot of pollution while outsized contributions to greenhouse gases that work vans make can mostly go away. Awesome!

If you don’t have complete environmental tunnel vision, you’d also know that the coolness of vans is coming back.

Vans Are Becoming Cool Again, But Van Life Can Still Be Professional

A few years ago, Honda tried to remind us that vans were cool 30-50 years ago. There was a commercial spot reminding us how cool they were in movies and TV. People also liked to customize them with cool graphics of gods and superheroes, among other things. Despite its best efforts, Honda just couldn’t bring the magic of Cheech and Chong’s van back. By 2009, vans were utilitarian vehicles that only people who didn’t care about what they drove went for, and no amount of nostalgia was bringing it back.

But now, there’s Van Life™. Instead of making the outside of the van cool and trendy, the insides are the main focus now. You start with a work van, mostly because work vans give you lots of interior space with which to build something really cool. Add some insulation, thin wood paneling, some furniture and cabinetry, a bed, maybe an air conditioner, some solar power and batteries, plus whatever else you want, and you end up with something unique, trendy, and often useful. The exterior is often left plain, but sometimes a fake business name and phone number adorns the side to enhance stealth and make it easier to camp in urban areas without attracting the attention of cops and Karens.

Some people live in their custom vans, many use them as an RV, but there are plenty of other applications. Some people use their van as a mobile office, either meeting with clients in it or just taking it to different locations every day to maintain better sanity (especially during a pandemic). Others blend a work van with the traditional weekend and summer RV, creating a mobile office that gives them the ability to travel and go work. This is obviously popular with remote workers, but it’s also a great option for people who chase in-person work in more than one area.

It’s this hybrid work vehicle plus living quarters arrangement that would do the most for me, but there’s a catch: gas-powered vans are tough to fit in a budget now. When gas is $4-5/gallon even in small cities in “flyover country,” and even more insane near the west coast, it’s hard to make the numbers work out for a van that’s supposed to both give you a place to sleep and get you to where the work is. 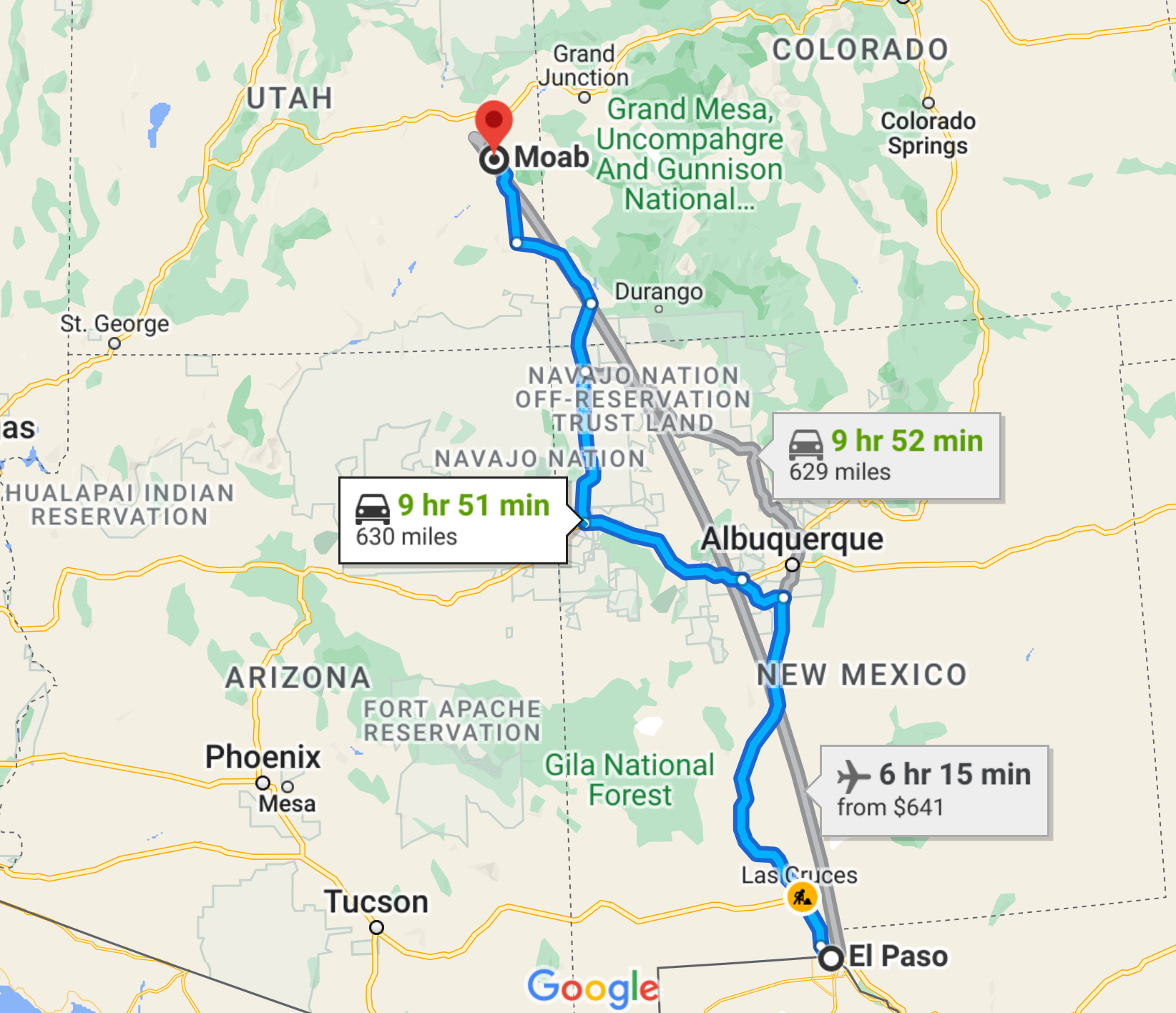 For me, the work I’d like to chase is in places like Moab, Utah. Google Maps says that’s 630 miles from home, or 1260 miles round trip. Add another 140 miles for going to different trailheads nearby, and we’re talking about 1400 miles total. With the most efficient large work/cargo vans converted to a camper inside, one can reasonably expect to get around 20 MPG. So, that’s 70 gallons of diesel fuel, which costs $5.15 per gallon in Albuquerque these days. That’s $360 in total.

But what if I took my 35 MPG VW Jetta with a bike rack instead? Instead of burning 70 gallons of diesel, I’d need 40 gallons of regular unleaded. That goes for $3.80/gallon in Albuquerque right now, for a total cost of $150. If I camp in a tent, that’s more than $200 cheaper than taking a van. If I get a cheap hotel for a couple of nights, it’s pretty close to break even.

An Electric Van Fixes This Equation

This is where electric vans could really shine. Not only are they coming out, but there’s a lot of potential for making an RV of one, either commercially or DIY.

If I put in the numbers for the same trip, I figure that I could do the same round trip from El Paso to Moab using about 700 kWh of electricity (that’s about 2 miles per kWh). At Electrify America rates of $.31/kWh, that’s $217, which is cheaper than diesel, and not much more than taking an economy car. Plus, you get to pick your own mattress in a van conversion instead of hoping the hotel doesn’t screw your back up.

If I take my time though, I can take advantage of free or cheaper charging along the way, which could reduce the cost down to economy car territory. How? Plugshare.com shows several Level 2 stations (like home charging) that don’t charge anything along the route, with some of them located in cool places like casinos or national parks/monuments. There are even a few free Level 3 DCFC stations here and there, including one in Moab. On top of that, I’d add solar to the van, which would both increase its efficiency (solar-powered air conditioning) and allow a tiny bit of Level 1 charging to the battery.

The Work I’d Do With Such A Van

For me, the biggest draw to building a custom van is being able to make it do what I want it to do. There are a lot of campers out there, but few of them are designed to carry e-bikes and other micromobility along for the reviews I’d like to do in cool places.

But, I don’t want to go burn a bunch of diesel to show people how well an e-bike works in Moab and other cool locations for a publication dedicated to clean energy. Plus, I think there are many stories around the United States that just don’t get told because they’re “small” and don’t justify spending money on transportation and hotels. Having a lower-cost option helps solve all of that.

To take care of all of those needs, I’d build something similar to Wilderness Vans’ “TransMoto” interior, but in whatever electric van I could come up with.

I’ve also got about 6 kWh worth of lithium batteries and several hundred watts of solar power ready to go, and I’d make customizations to make it easier to take kids and pets along for the ride so I could be away for longer and do more.

My Pitch To The Van Manufacturers

I could go into a lot more detail on the build I’d do, but as the old OMC song says, “Wanna know the rest? Hey, buy the rights.” If you work for Ford, Brightdrop, Rivian, Mercedes-Benz, or some other company making electric work vans, I’d like to see about getting a van we could feature here on CleanTechnica. I don’t think a traditional media loan would work, as I’d need to hack on it and modify it to do the job, unfortunately. So, we’ll need to come to some other arrangement.

Showing the public that electric vans can be great for work, fun, or both not only serves our mission here, but could whet the appetite for a whole lot of electric vans in the future. Not only would I be able to show that it’s good for fun things like hauling bikes or serving as a camper, but I’d have other in-town work with family that we could put it to the test with before we start documenting the build.

I can be reached here or here if I haven’t already reached out!

Have a tip for CleanTechnica, want to advertise, or want to suggest a guest for our CleanTech Talk podcast? Contact us here.

Creating an affordable neighborhood in Philadelphia could redeem Roundhouse’s past