U.S. travel costs are soaring as demand reaches some of its highest points since the global pandemic began, a trend that shows little sign of stopping as summertime travel heats up.

Airline bookings in February hit their highest point since COVID-19 decimated flying in the U.S. in early 2020, while hotel occupancy is higher than it has been for most of the last two years. Combined with rising costs for labor and energy and short supplies, these factors are driving travel prices to jump by leaps and bounds, contributing to the fastest rise in broad consumer prices since the 1980s. Hotel prices, for example, rose at the fastest rate on record in February compared to a year ago, according to the U.S. Bureau of Labor statistics. 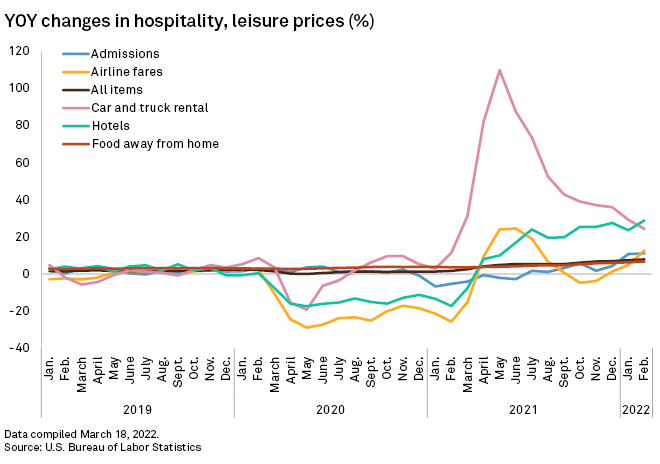 After hearing tales of dirt-cheap hotel room rates and plane tickets during the height of the pandemic, travelers expect to find bargains. Instead, they are finding vacations with jaw-dropping price tags attached, often twice what they were expecting to spend, said Robike Noll-Faries, owner of Seeitall 2 Travel, a travel agency in Paramus, N.J.

Those steep price hikes and a potentially historic surge in demand for leisure are not getting in the way of travelers’ plans for summer fun, Noll-Faries said.

“People are looking at these prices and they’re complaining, but it has been two years, they want to go on vacation and they’re going,” Noll-Faries said. “It’s time.”

The number of U.S. air passenger trips for domestic and international flights in February was 19.9 million, according to data from the Airlines Reporting Corp., which tracks more than 200 airlines and more than 10,000 retail travel agencies. It was the most trips since the pandemic began, while still below the 24.9 million trips in February 2020, it was well above the 2.2 million at the industry’s low in April 2020. Airline fares have reflected this increase in demand, with the average, domestic roundtrip ticket price rising to $464 in February, from $346 a year earlier.

Airlines still lag pre-pandemic capacity levels, with total March seating trailing 2019 levels by 8% for domestic flights and 24% for international flights, according to aviation industry analytics company OAG. Seating levels, however, are at or near their highest point since March 2020.

U.S. hotel occupancy hit 66.9% for the week ending March 19, according to industry data and analytics company STR. That is the highest level since August 2021 and above rates throughout 2020 and much of last year. The average daily room rate for a U.S. hotel room was $137.39 in February, up from $98.31 in February 2021, according to STR, which measures the metric by dividing total revenue by the number of rooms sold.

The rise in prices has yet to deter buying, said Vivek Pandya, a senior digital insights manager at Adobe who has done research on airline travel demand.

“At the moment, the desire to travel is really strong and that’s propelling continued bookings in the midst of higher prices,” said Pandya.

Demand, and prices, will continue to rise as the summer travel season nears, as COVID-19 cases come down and attitudes around the health risks soften, Pandya said. But several factors, notably a rise in cases of COVID-19 variants, could upset that trajectory.

“It is a pretty volatile environment so it’s very difficult to predict,” Pandya said.

“We are optimistic that pent-up demand will result in strong spring and summer seasons with business travel beginning to return to a level of normalcy in the latter half of 2022,” Cuculic said in an email.

Russia’s invasion of Ukraine drove up costs for fuel, with the average price for a gallon of gasoline at $4.23 as of March 31, a rise of more than 60 cents in a month, according to AAA. The war may also dampen some U.S. travel to the euro area, potentially hiking demand for domestic high-end resorts, said Bram Gallagher, a senior economist with CBRE Hotels’ Americas Research.

A sharp jump in gas prices or hotel lodging costs are unlikely to upend spending on trips, particularly for more affluent travelers, said Chris Woronka, a leisure and lodging analyst with Deutsche Bank. This has allowed higher-end hotels and resorts to easily pass on increased costs to customers.

“When everything is going up there can even be a degree of acceptance,” Woronka said.

Still, like much of inflation’s impact, higher prices are likely to hit more budget-conscious travelers harder. This could eat into demand for less expensive roadside motels this summer.

“Everybody has a budget,” Woronka said. “If gas stays high or goes higher, with all these other costs increasing … at some point you’re going to have a subset of customers say, ‘Look, I just can’t do this trip.'”

A shortage of semiconductors has curbed the production of new cars, which is driving up the costs of rental cars as businesses look to secure new and used vehicles.

Hotels, meanwhile, are facing multiple cost increases, but none more than labor costs, as a worker shortage has forced the industry to raise wages. In February, there were nearly 1.7 million job openings in the leisure and hospitality sector and hourly wages were at $19.68 in March, up from $16.31 pre-pandemic, according to the Bureau of Labor Statistics. 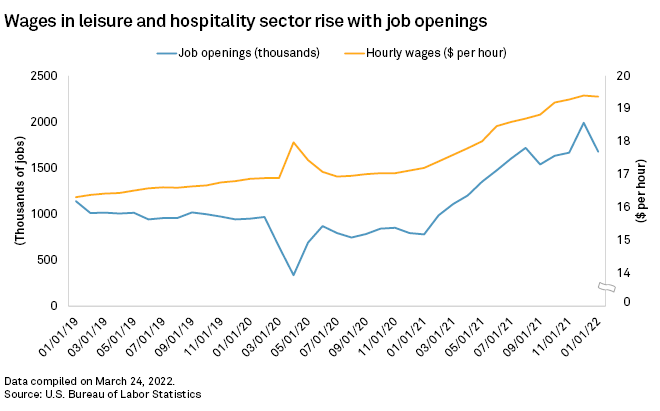 This has compelled many hotels to keep staffing levels relatively low, leaving some rooms unsold due to a lack of workforce.

“This is a labor problem,” said Gallagher of CBRE. “A lot of hotels are going to have to decide, ‘How full do I actually want my hotel? Can I afford the costs of labor?’ That may stymie demand.”

Hotels, so far, have “seamlessly,” passed on higher costs to consumers, said Smedes Rose, a director at Citi who focuses on lodging, gaming and leisure companies. It is unclear, though, how long hotel customers will accept paying more for a room at a hotel with fewer staff and amenities. For now, these hotels are looking at their budget plans and almost starting from scratch. Management positions that were eliminated in 2020 may never come back. Some services that were put on pause may never return.

“It’s probably pretty complex, but rarely do you have the opportunity to shut down and have zero revenue and zero costs and then just rebirth an industry,” Rose said.