What is the point of Manchester United right now?

The Athletic does not mean to ask this with an adolescent huff and apathetic shrug of the shoulders but instead to try and engage in a thought-provoking exercise.

What is the point, the goal, the objective, the ultimate aim and the ambition of Manchester United at this current point in time?

United have spent several years tinkering with various tactical schemes in an attempt to become a consistent top-four team. Everyone in and around the club understands United need a rebuild in order to eventually break up the Liverpool-Manchester City duopoly and earn a 21st league title, but there are various viewpoints and suggestions as to how to best go about it.

“Get Champions League football now and figure out the rest later” is a crude summation of United’s scattergun decision-making process. But their squad is a jumble. Players best suited to counter-attacking football stand next to individuals who would prefer to work in a pressing team, or players who would thrive in a possession-based side.

United are a team vaguely aware of their destination but have little idea — and even less appetite — as to how to get there. On Saturday they were beaten by an Arsenal side who weren’t particularly impressive but played with a clearer sense of what they wanted to do with themselves. 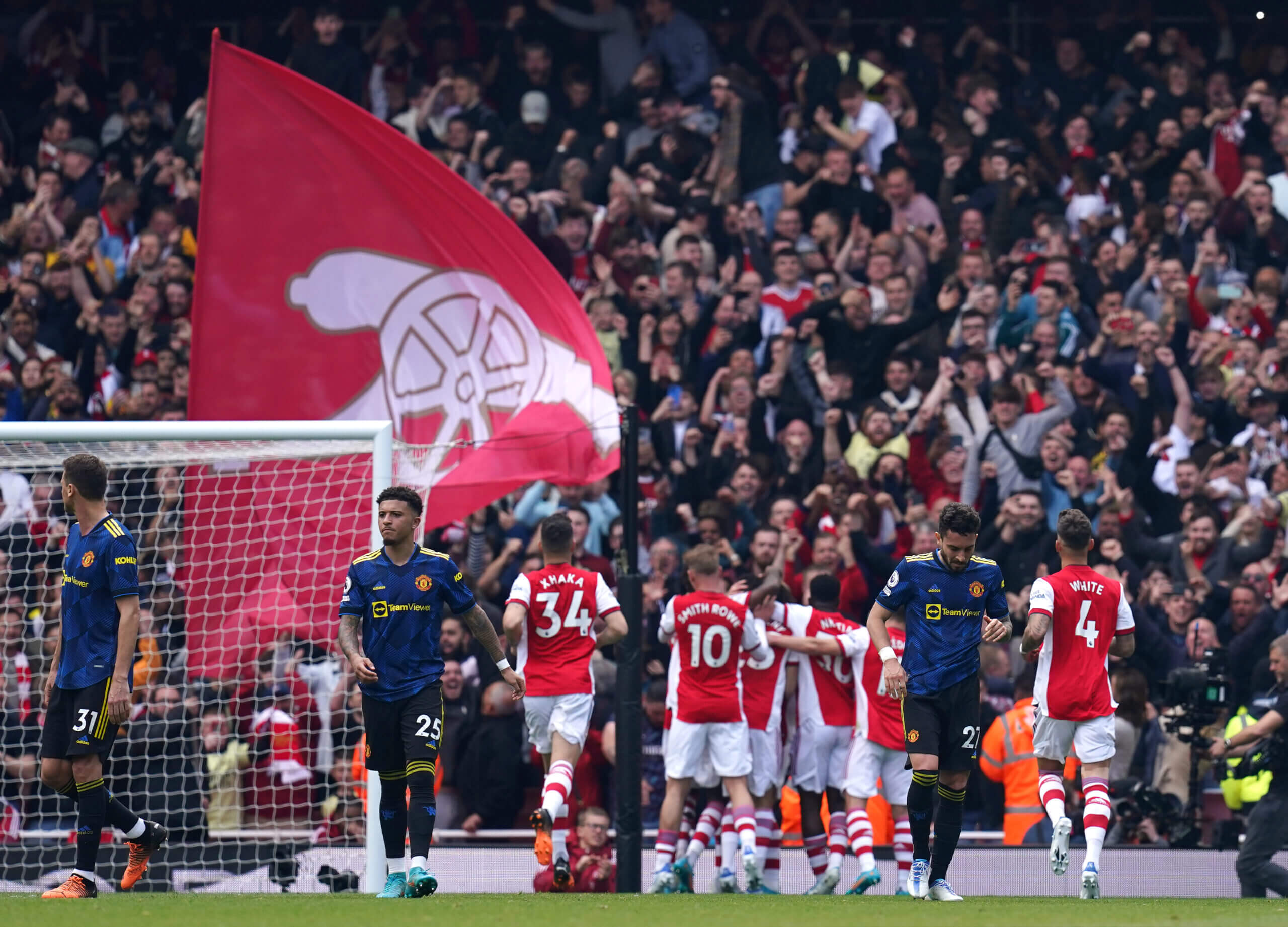 “For me, even before the game it (finishing in the top four) was not very likely, but after today’s result it is gone, yes,” said Ralf Rangnick following the 3-1 defeat. The interim coach’s press conferences increasingly have the demeanour of a maths teacher who has grown weary of teaching algebra to a group more comfortable using an abacus.

United conceded after only three minutes at the Emirates as mistakes from Raphael Varane and Alex Telles conspired to let a simple cross reach Bukayo Saka, whose shot was eventually deflected into the path of Nuno Tavares who finished from close range. They went 2-0 down in the 32nd minute after a pinball-style collision between Telles and Saka was judged a penalty-worthy offence.

Despite this deficit, Rangnick’s side spent much of the first half attacking with reasonable effort and quality. In a game that boasted one of the weakest quartet of full-backs across the history of Arsenal versus United matches, there was plenty of space for Jadon Sancho and Anthony Elanga to run into once United went through the gears.

A deep cross from Nemanja Matic on the left found Cristiano Ronaldo in the 34th minute to make the score 2-1. Ronaldo’s goal was his 100th in Premier League history – at 37 years of age, his every movement and decision is made with the ultimate aim of scoring goals. It is sometimes an objective that was lost on his United team-mates during their brief and often panicked moments of possession.

United would attempt better in the second half but lacked concentration in midfield and precision when executing their golden opportunities. Full-backs Diogo Dalot and Telles frequently toiled in their defensive duties, unsure of where to stand and when to press.

Bruno Fernandes, previously an irrepressible cocktail of high-risk, high-reward, high-energy and high confidence passing, cut a jaded, reckless figure. Fernandes’ ultimate objective is to get the ball forwards and make things happen but United’s captain for the day has been out of sync in recent weeks. His hop-skip-and-a-jump penalty technique, so faultless during the closed-door sections of the previous two seasons, came a cropper against Aaron Ramsdale, who held his nerve a fraction of a second longer as Fernandes’ spot-kick hit the woodwork and went out of play. A vital moment to restore parity was gone.

A touch over 10 minutes later, Fernandes would lose the ball on the edge of his own area, beginning a sequence that would lead to Arsenal’s third goal from Granit Xhaka. The closing moments of Saturday’s game would see Fernandes again engage in uncertain tackles before being substituted for Juan Mata. United’s attacking catalyst has gone from reacting well to clever moments of play from his team-mates to reacting poorly to the widespread malaise that has beset United.

“We have to get better at defending in the box,” was Rangnick’s post-match assessment. “The way we did that until five, six weeks ago we were on a higher level. Even in the pressing moments, whenever we pressed, Arsenal we were causing problems but we just didn’t press often enough. We should do it more often with more intensity and more players involved. If all the players sprint against the ball it has an even higher effect than it has today.”

United have conceded 51 Premier League goals this season, only the second time they have passed the 50-mark in a campaign (since conceding 54 in 2018-19). But even in their better moments, United have found their individual moments of quality on one side of the pitch undone by individual mistakes at the other. The improvisational quality that brightened much of Ole Gunnar Solskjaer’s tenure has been replaced by a sense of learned helplessness and distrust in whatever systems Rangnick is trying to get across. 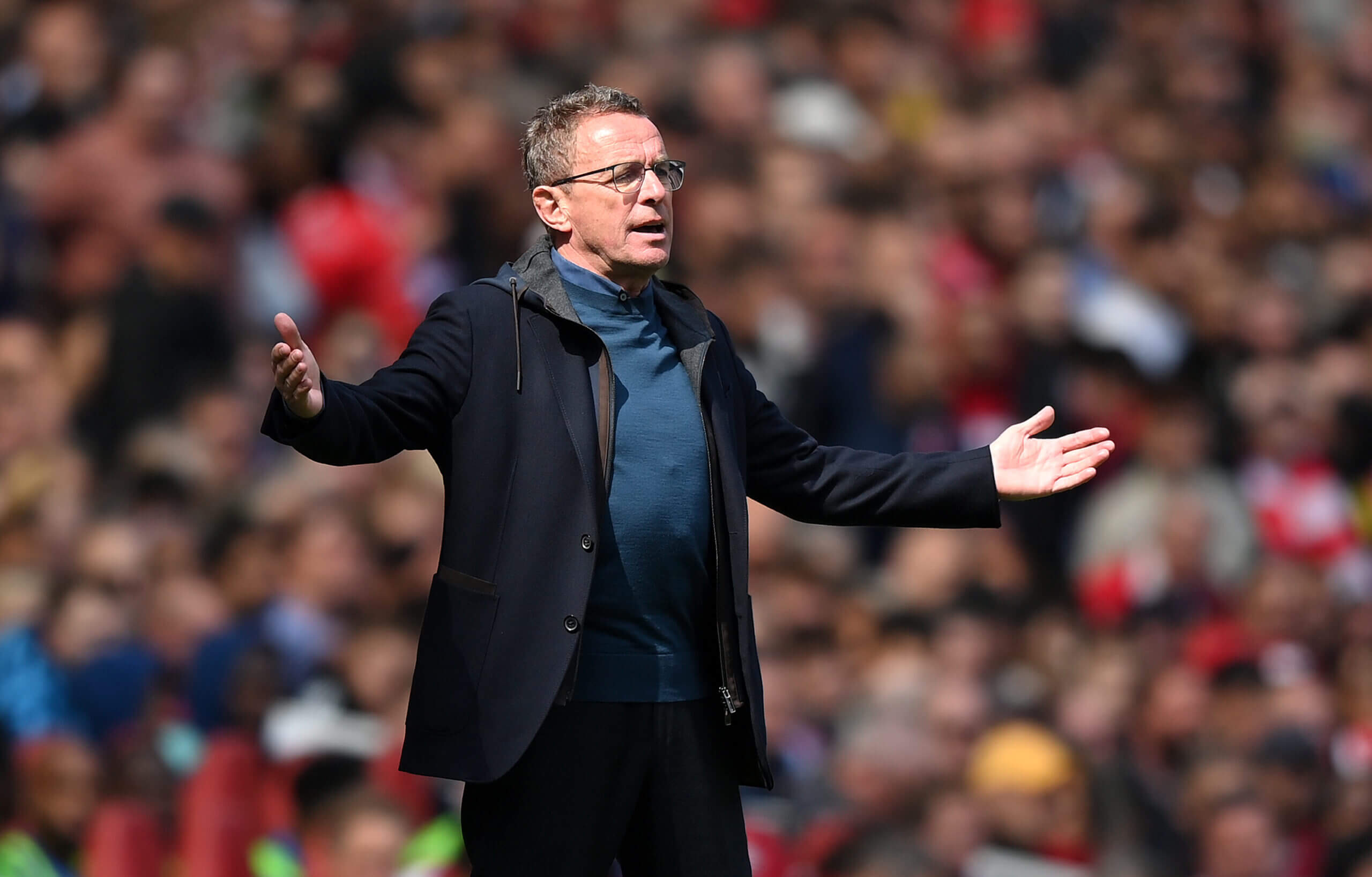 The interim manager is known as the godfather of gegenpressing but it is a system that requires consistent levels of application and industry. If a player asks why Rangnick needs them to press, they should (in theory) expect an answer that talks about the need for collective cohesion. But if a player begins to worry “What is the point of me doing this?” then the cohesion is at risk and the collective will fail.

Rangnick is forthright about United’s underperformance in interviews but he seems unsure as to how to get this group of troubled players to buy into his plans. The shrug of the shoulders he occasionally answers questions with has travelled to the players.

“For myself, it’s a bit of balls in your performances, man,” Scott McTominay told BT Sport. “That’s what it comes down to, the fundamentals of football… It comes down to the basics and we never do them well enough in big games recently.”

Apathy, rather than Arsenal, ultimately defeated United on Saturday, as players gradually shrank within themselves in a game that was there for the taking. There will be no announcement of a new manager next week to puncture these dark clouds, only the visit of Chelsea on Thursday. Rangnick has admitted it is difficult “keeping the energy up” of his confidence-stricken side, but United will need to find something to strive for between now and the end of the season.

There needs to be a point to all of this if United want to win more Premier League points.