The conflict in Ukraine has travelers rethinking upcoming trips to Europe. Security experts weigh in on whether there is cause for concern.

For the past two years, the majority of global travelers have been very focused on one main issue when it comes to safety: the coronavirus pandemic. But that changed seemingly overnight on February 24 when Russian troops invaded bordering Ukraine and war broke out in Europe, suddenly making the conflict—rather than COVID—a top concern for many would-be international travelers.

Following the invasion, the U.S. embassy in Ukraine urged American citizens to depart immediately, and the U.S. State Department issued a Level 4 Russia travel advisory informing U.S. citizens that they should not travel to Russia at this time due to “the unprovoked and unjustified attack by Russian military forces in Ukraine.”

Russia’s actions immediately prompted airspace closures over the conflict zone, forcing flight paths to be rerouted, and many nations, including Canada, the United States, and much of Western Europe, have since banned all Russian-operated flights from their airspace and airports. The conflict has resulted in an onslaught of sanctions on Russia and a spike in jet fuel prices due to the cutoff of supplies from the region.

There has also been a mass exodus of refugees—1.73 million to date, according to the United Nations—fleeing Ukraine to bordering and nearby countries, including Poland (which has already welcomed more than 1 million people alone), Hungary, Slovakia, Moldova, and Romania.

The Russia-Ukraine invasion is now a top concern for travelers

As the world watches the heartbreaking crisis unfold in real time, recent surveys and booking data show that the Ukraine invasion has already resulted in a drop in confidence and demand for travel to Europe from the U.S. just as transatlantic travel was poised to experience a massive recovery surge after being battered due to the pandemic. 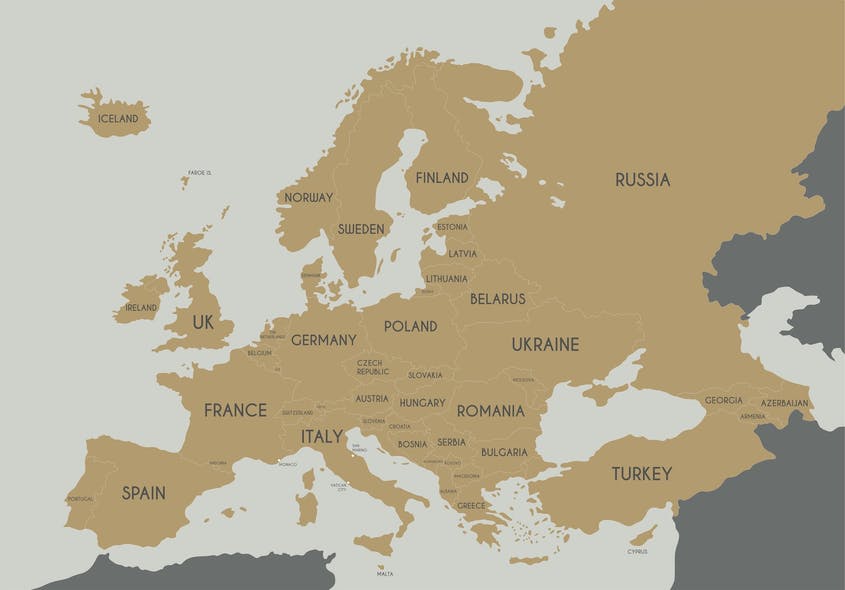 Europe flight searches that were trending up in January—following the gradual decline of the Omicron-fueled wave in COVID cases—have started to slump after the February 24 invasion, according to travel booking site Hopper. International flight searches have shifted away from Europe to destinations like Mexico, Central America, and the Caribbean, and since mid-February, Europe has dropped from 21 percent to 15 percent of international bookings, Hopper reported. (During a more normal year, like 2019, Europe typically accounts for approximately one-third of international bookings from the United States at this time of year.)

A survey conducted last week of 350 adult U.S. travelers with upcoming plans to visit Europe found that 62 percent are concerned about the war in Ukraine expanding to nearby countries. That was double the number of respondents—31 percent—who cited COVID-19 health and safety concerns as a factor in their Europe travel decisions.

The survey, which was conducted by MMGY Travel Intelligence, the research division of marketing firm MMGY Global, also found that nearly half of travelers (47 percent) would rather wait and see how the situation in Ukraine plays out before making plans to visit Europe this year.

That wait-and-see sentiment has been reflected elsewhere as well. When travel website the Vacationer surveyed 1,096 adult Americans last week, 40 percent said they are reconsidering travel plans because of Russia’s invasion of Ukraine, and 36 percent reported that they feel less safe traveling now than before the Russian invasion.

Given the concern and unease, we reached out to travel risk management and security experts to offer their insights into whether it is safe to travel to Europe right now. Here’s what they had to say.

Is it safe to travel to Europe right now?

When asked if it is safe to travel to Europe right now, Mike Susong, senior vice president of global intelligence for crisis response and risk management firm Crisis24, responds with “a qualified yes.”

“The wholesale invasion of Ukraine by Russian combat forces is unprecedented in recent history, lethal and still highly unpredictable as to the outcome and impact,” says Susong, a former Central Intelligence Agency (CIA) operations officer, U.S. Army combat veteran, and a board member of the Defense Intelligence Agency’s National Intelligence University Foundation. “Trouble can travel fast and impact our lives suddenly.”

But, he adds, “Brussels, Belgium is 1,300 kilometers [800 miles] from Lviv, Ukraine.” In other words, popular travel destinations in Western Europe are hundreds of miles from the armed clashes taking place in eastern Ukraine. Currently, the conflict is contained within the borders of Ukraine, Belarus, and western Russia, he notes.

Just one day before Russian troops marched into Ukraine on February 24, Ukraine’s foreign minister Dmytro Kuleba warned the United Nations General Assembly that “the beginning of a large-scale war in Ukraine will be the end of the world order as we know it.”

“We are currently at the middle of the largest security crisis in Europe since the Second World War,” Kuleba added.

The invasion has already ushered in that heightened level of insecurity in Europe and throughout a world that is waiting and watching—often with gaping mouths and tears in their eyes—to see how it plays out and how severe the repercussions will be.

Is it safe to fly to, and through, Europe?

Even if their desired Europe travel destination is far from the conflict zone, some travelers are questioning whether it’s safe to fly across the pond at all.

“Traveler trepidation is understandable, but I don’t feel there’s any need to cancel vacations or business trips to Europe or Central European countries,” advises Dan Richards, CEO of Global Rescue, a provider of medical, evacuation, and travel risk management services.

For some observers, the current conflict is bringing back memories of Malaysia Airlines Flight 17, which in 2014 was downed by a Russian-made surface-to-air missile over Ukraine on a flight from Amsterdam to Kuala Lumpur. All 298 people on board the 777 were killed, leading safety experts to call for tougher restrictions on commercial airliners flying near conflict zones.

“They’ve put new safeguards in place,” says aviation safety expert John Goglia, a former member of the National Transportation Safety Board, adding that travelers should be reassured that “the airspace over Ukraine is totally closed off.”

“It is safe to fly” within Europe, Goglia says.

Jeremy Prout, a former U.S. Marine Corps officer and director of security solutions at International SOS, a global health and security risk management firm, says that his firm has assessed that it is safe to travel in Europe right now.

“What we believe is that Russia’s aims are really territorial control of Ukraine in order to create an additional buffer from the West,” says Prout. “It’s unlikely that they’re going to use military force against other European nations due to mutual defense pacts in place between the EU and NATO members. By starting a conflict with Romania, for example, you’re really escalating a conflict that Russia is already struggling with at present into a much larger [conflict] and it would be incredibly challenged to fight this on multiple fronts.”

While security and risk management experts for the most part agree that travel to the majority of Europe remains safe right now, they also acknowledge that there are several ways in which the ongoing conflict could impact upcoming Europe trips. The best way for travelers to protect themselves and their Europe journeys is to be armed with information and to make practical preparations in advance of their departure.

Commercial air traffic could be rerouted, causing cancellations and delays

Due to airspace restrictions, international airlines are rerouting flights in order to keep aircraft and passengers safe. At the very least, the rerouting of some services could lead to longer flight times.

“Travelers should be aware that potential commercial air traffic rescheduling in Central European airspace may cause flight delays or cancellations,” says Richards. However, experts say the majority of Europe air travelers likely won’t be affected.

Protests are taking place throughout Europe

Protests against the war in Ukraine are happening across European cities, from Barcelona to Berlin, where thousands took to the streets over the weekend to voice their outrage against the war. “Anytime there are mass gatherings, there is increased risk related to the response of security forces and the actions of the protestors,” says Frank Harrison, regional security director for North America at World Travel Protection, a travel and risk security management company.

Harrison notes that at this stage, all protests appear to be peaceful. “However, travelers should expect delays, restrictions, and opportunistic criminals looking for easy targets, so always be aware of your surroundings. If you find yourself in a protest that does become violent, move away from the conflict area and avoid security forces. We have heard examples of tourists being mistaken for protestors by security forces,” says Harrison.

A large number of refugees are leaving Ukraine

Harrison also reminds travelers that countries in Europe near and bordering Ukraine are being inundated with displaced persons and foreign nationals trying to escape. “For any planned visits to Eastern European countries that border Ukraine, be aware of congestion at the border and the impact of the refugee crisis on transport infrastructure,” he notes.

Travelers who would like to assist refugees fleeing Ukraine can donate to organizations that are aiding and supporting the displaced, including:

For those traveling abroad, there’s always the option (and it’s never a bad idea) to enroll in the U.S. State Department’s Smart Traveler Enrollment Program (STEP), a free service that allows U.S. citizens heading to another country to register their travels with U.S. embassies and consulates. This is a way to get frequent travel and security updates for the country or region they’re traveling to, and also reach out for help in the event that commercial air options suddenly become limited.

Travelers should give friends or family members back home a copy of their itinerary, so their network is aware of their whereabouts, as well as a copy of their passport and any other critical documents in case they end up needing an additional record.

“The most important thing about traveling to Europe right now is to stay informed and connected,” says Harrison.

Prout of International SOS says that one thing travelers to Europe might want to do is bring a little more cash than usual in the event that there’s some kind of cyber disruption that, for example, would make obtaining cash from ATM machines difficult.

The war in Ukraine aside, 2022 is gearing up to be the easiest time to travel to Europe in two years, as European countries continue to relax their COVID travel restrictions and eagerly anticipate what was expected to be a big uptick in visitors this year.

Italy and France recently dropped their prearrival COVID testing requirements for vaccinated travelers (the U.K. is also no longer requiring a prearrival test), and Iceland and Ireland have dropped COVID restrictions entirely.

Of course, concerns about travel during a war are valid, but it remains true that there are advantages to traveling to Europe in 2022—namely to reunite with friends, family, and places many haven’t seen in far too long due to COVID restrictions and public health considerations. As with the pandemic, the crisis in Ukraine has brought so many people together in their desire to help and support those who are at risk, reminding us once again that we are more connected than ever, even when we are far apart.

Travel news: World’s most spectacular airport about to double in size

Summer’s over, but the European travel season isn’t