“There’s energy in the building.” Magnolia Pictures has revealed the official trailer for a documentary film titled in full: Dreaming Walls: Inside the Chelsea Hotel. It is indeed about the iconic “Hotel Chelsea” in New York City’s Manhattan on W 23rd Street (see Google Maps). The film premiered at the Berlin Film Festival earlier this year, and also played at the Thessaloniki Documentary Festival, CPH DOX, and next is screening at the Tribeca Film Festival in NYC this month. The end of an long upmarket renovation of the legendary Chelsea Hotel is partly longed for and partly dreaded by the artists who still live there. The film grants us access to their apartments and interweaves the past with the present. “Famous as the preferred abode of New York’s bohemia from the 1950s to the 1980s. Here, bourgeois society’s misfits – sex workers, poets, queers and artists – were able to find cheap accommodation and form alliances. In this documentary, the remaining tenants from that era grant access to their flats and give us an insight into their lives.” Looks like a melancholic profile of a building and how the many people that lived there made it something special.

Official trailer for documentary Dreaming Walls: Inside the Chelsea Hotel, direct from YouTube: 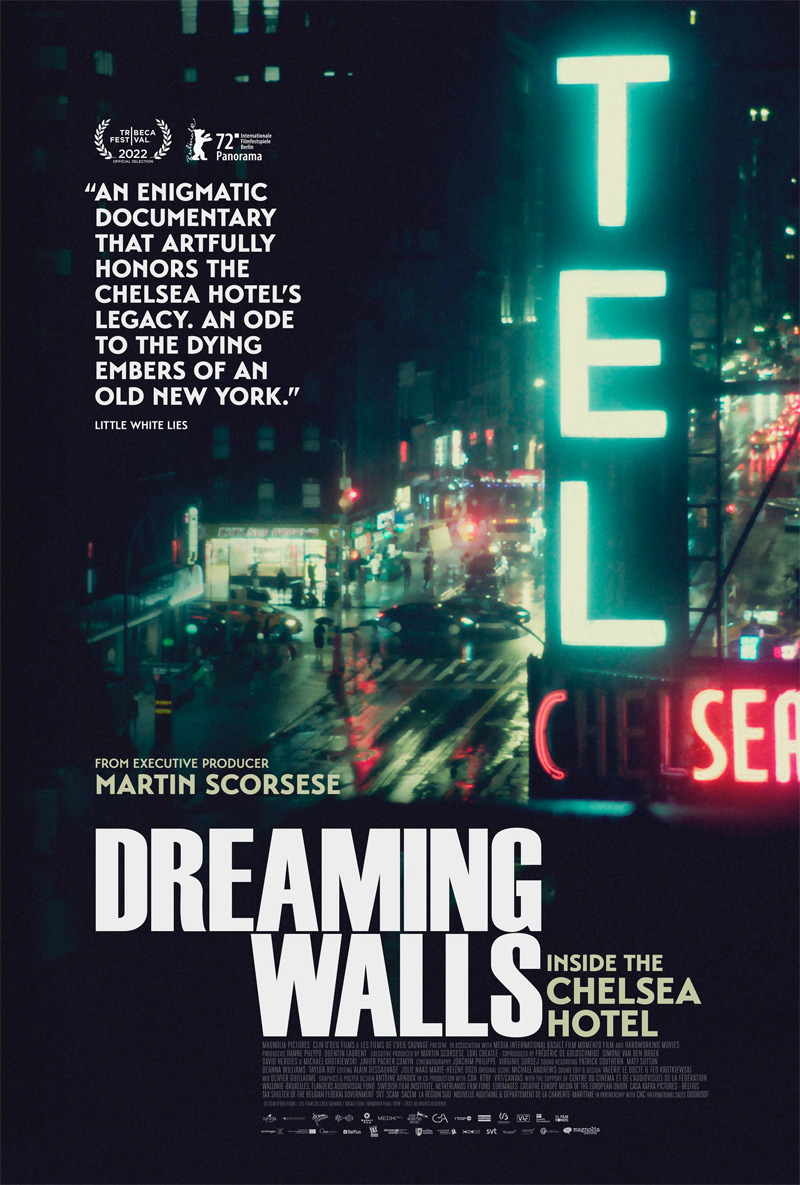 The legendary Chelsea Hotel, an icon of the 1960s counterculture and a haven for famous artists and intellectuals including Patti Smith, Janis Joplin and the many superstars of Warhol’s Factory, is under renovation. Soon it will reopen to the public as one of New York’s most fashionable luxury hotels. Dozens of people, most in their later years, still live amidst the scaffolding and constant construction. Against this chaotic backdrop, the film takes us through the hotel’s storied halls, exploring its living body and the bohemian origins that contributed to its mythical stature. Its residents—casualties of capitalism—and the walls themselves now face a turning point in their common history. Dreaming Walls: Inside the Chelsea Hotel is co-directed by filmmakers Amélie van Elmbt (director of the films Headfirst, Drôle de père) & Maya Duverdier (making her directorial debut). Executive Produced by Martin Scorsese and Lori Cheatle. This initially premiered at the 2022 Berlin Film Festival earlier this year. Magnolia will debut the doc in select theaters + on VOD starting July 8th, 2022 this summer. For more info, visit the film’s official site.

The best time to visit Salzburg

How A Travel Credit Card Can Be Valuable This Summer

Charles Barkley waxes poetic on his golf game, gambling, NIL and his love for Lake Tahoe