“We are booked solid already for the opening weekend,” said Alex, working with his crew in the parking lot at Destination Daytona in Ormond Beach on mid-week preparations at his vendor tent that will shift into high gear on Friday’s official opening day of the 10-day run of the 81st annual Bike Week.

“The event has booked up faster this year than in the past,” Alex said. “We started getting phone calls at the shop three or four weeks ago, as opposed to just the week before. We’re anticipating a phenomenal Bike Week.”

Pop quiz:Think you know everything about Daytona’s Bike Week? Test your knowledge

From Destination Daytona to the merchants on Main Street in Daytona Beach, the event’s traditional epicenter, expectations are high for an event that is poised to rumble into Volusia County in a big way after two years often dominated by COVID-19 headlines and restrictions.

“We are very, very excited,” said Shelly Rossmeyer Pepe, general manager of Bruce Rossmeyer’s Harley-Davidson at Destination Daytona. Beyond a return to normal, interest in this year’s event is “above our expectations,” she said.

“The spirit is great right now,” Pepe said. “People feel really great. The industry, the customers, everybody is feeling like this is going to be an amazing event.”

Attention to COVID guidelines “is still a topic,” Pepe said. “We want everybody safe, but it’s not the focus. It’s a relief to focus on the event, to show our visitors a good time.”

That echoes the sentiment expressed earlier this week by Janet Kersey, executive vice president and chief operating officer of the Daytona Regional Chamber of Commerce, which organizes the event. 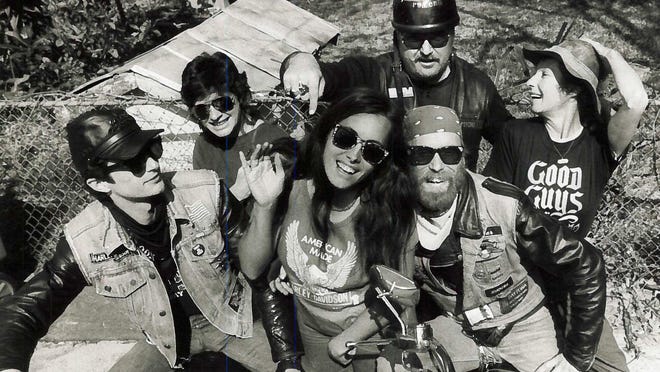 Available vendor spots are pretty much sold-out and attendance at the event is estimated to reach 300,000-400,000 visitors throughout the region that includes Volusia, Flagler, St. Johns, Duval and other counties in Central Florida, Kersey said.

In the hospitality realm, many hotel managers are reporting that rooms already are sold-out for the duration of the 10-day event at rates that often exceed pre-pandemic levels.

Outside the Rossmeyer showroom, meanwhile, the 150-acre Destination Daytona venue is packed with more than 110 vendors, up from 95 at last year’s event.

The list includes Ormond Beach-based Coastal Moto, offering custom wheels for Harley-Davidson motorcycles. Jason Spillers, the company’s president, anticipates more customers this year that have made the trek from northeastern states as pandemic restrictions have eased.

“What we missed the last two years was that northeastern group of people from the New York, New Jersey and Massachusetts area,” Spillers said. “I think a lot of them are going to come down this year. And Canada, too, since the border opened, we’re hoping the Canadians will make it this year.” 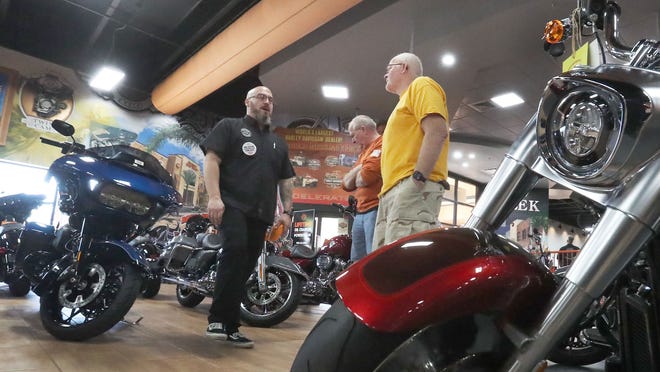 Nearby, the early-bird crowd at Destination Daytona included two brothers from Pennsylvania, who said that browsing vendor tents was a highlight of their annual Bike Week visits.

“We usually come early and leave early,” said Dan Stuckey, 67, of Altoona, Pa., who had teamed with his brother, Dave, for a ride on their Harleys to the event. “We both really enjoy the vendors. We don’t care much for the bands and we’re both not really drinkers, but we like the atmosphere, seeing the dealership and the vendors.”

In the dealership’s café, another Bike Week visitor had made the trek from South Africa, a bucket-list trip that had been delayed two years by the pandemic.

“The technology, the mechanical things you see here, you don’t see much of in South Africa,” said Leon Botha, 60, who flew from his home outside Johannesburg to New York and then to Orlando. He’s staying with a friend in DeLand and renting a Harley-Davidson from Rossmeyer for the event, he said.

“I like the atmosphere,” said Botha, owner of a transport company. “I’m going to spend four days here and then ride to Key West, Tampa, New Orleans and Jacksonville. I’m going to do a loop around Florida.”

On Main Street, meanwhile, license plates on the gleaming motorcycles that lined the street reflected a crowd that hailed from a diverse assortment of states including Kansas, Ohio, New York, Minnesota, Wisconsin, Vermont and Texas, as well as Canadian visitors from Quebec and Alberta. 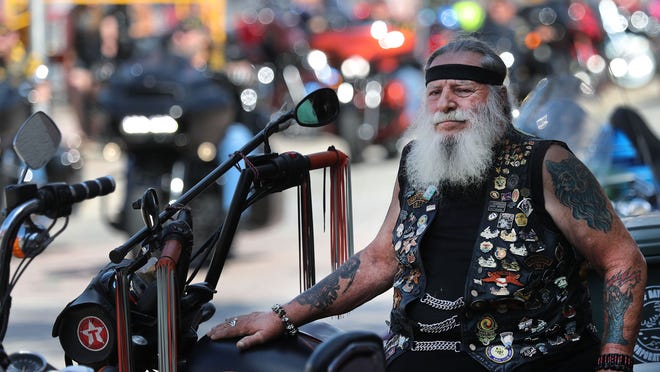 “We’ve bought more supplies than ever for any event, and we’re still getting packages delivered,” Yanesh said. “We have over 60 Bike Week designs for people to choose from, which is double what we usually offer.”

Across the street, Johnny Sanchez, owner of John’s Rock ‘N’ Ride, expects Bike Week to build on the momentum generated for his store by Speedweeks and the Daytona 500.

“During the 500, we were slamming on Main Street,” Sanchez said. “Now, for Bike Week, the weather’s beautiful, Florida is wide open and I’m saying, ‘Come on down.’ We’re ready for the crowd.”

WHERE: Daytona Beach and elsewhere in Volusia, Flagler, St. Johns and Duval counties